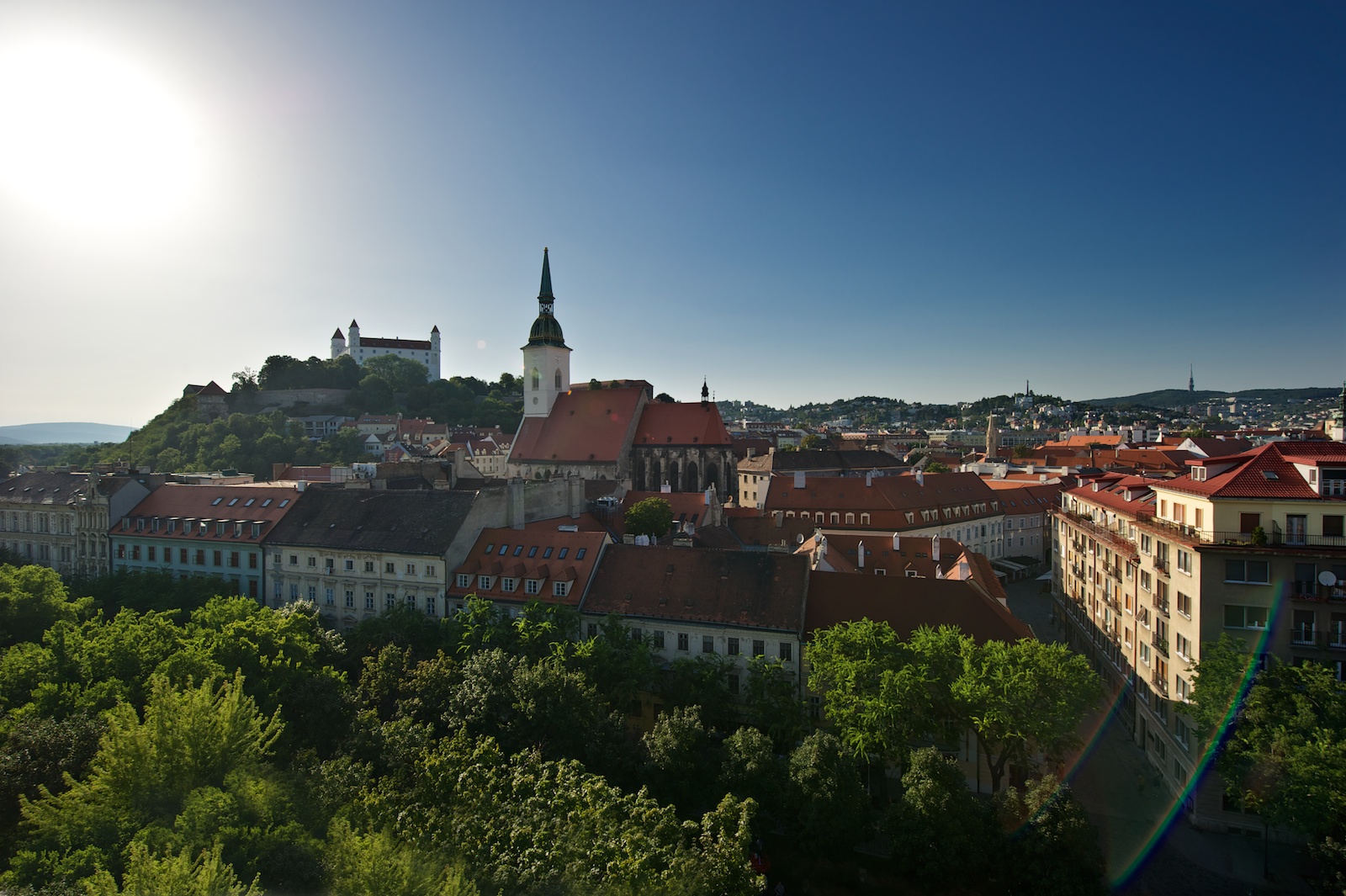 You will find a number of historical monuments and opportunities for cultural enjoyment in Bratislava. Combine your stay with a visit to this historical city and enjoy the beautiful memories from your stay. 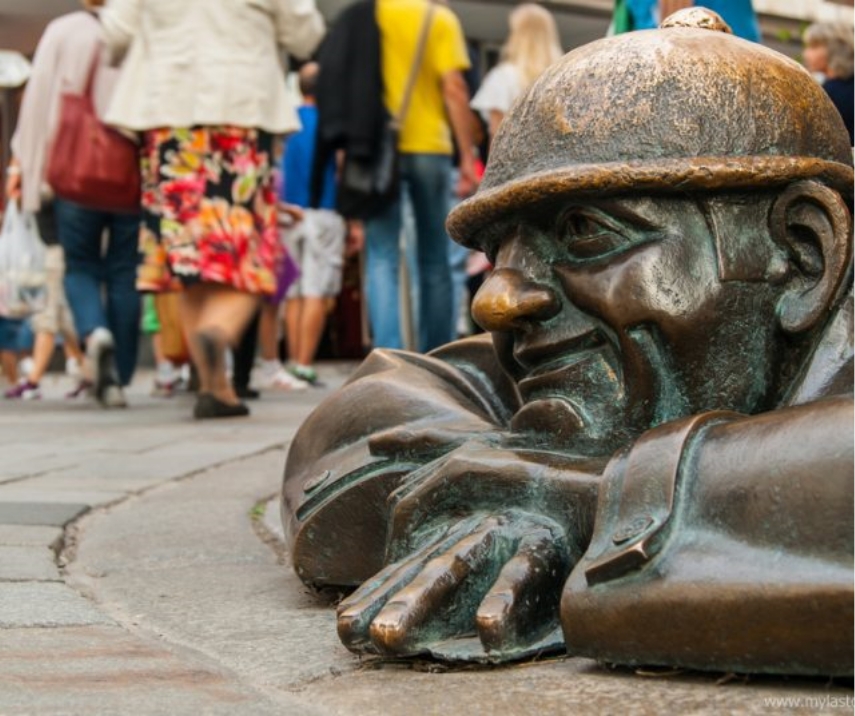 The bronze figure of a man peeking out of the canal is undoubtedly the most photographed statue in the city.

Čumil was created in 1997 under the hands of academic painter Viktor Hulík. Since then, it is one of the symbols of the city. There is a legend circulating among the visitors of the city that if you touch its cap, it will bring you happiness. That’s why the cap already visibly battered.

Čumil survived two accidents and even an attempted theft and to this day it is still a popular stop on a walk through the Old Town. 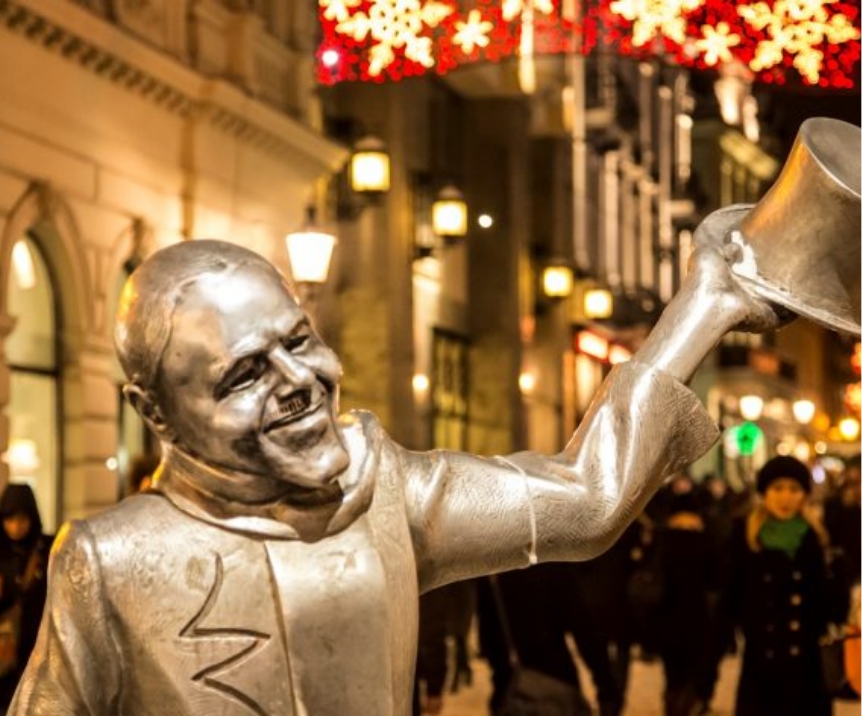 The legendary statue of Schone Náci is located in the centre of Bratislava. The statue is a reminiscence of Schöne Náci, whose original name was Ignác Lamár. This elegant, smiling man was born in the borough Petržalka, where his father Karol worked as a shoemaker, who introduced his craft to his son. Schone Náci became famous mainly for his gentlemanly appearance in public. He was born in 1897 and became famous for walking the streets of the city in an elegant tailcoat and a top hat. Before the fair sex, as a true gentleman, he removed the top hat from his head and gave a lady a flower or song in his performance. 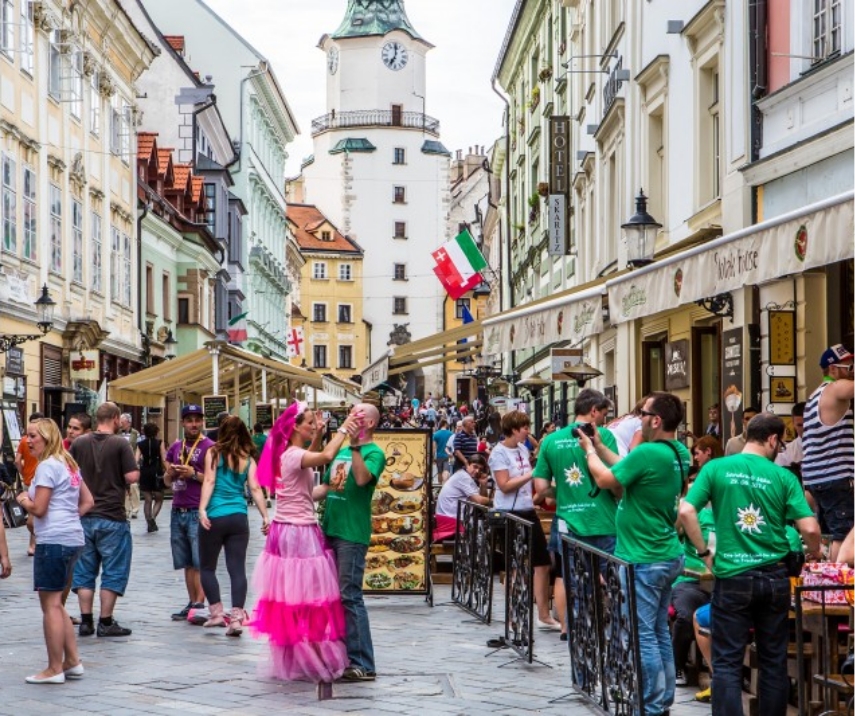 Of the original four entrance gates, only the northern Michael’s Gate has been preserved. It was built in the 14th century and was named after the Gothic church of St. Michael, which was located in front of the fortifications and was demolished by Turks in the 16th century. Thanks to its high onion-shaped roof, the gate tower is one of the dominants of the Old Town. The balcony offers panoramic views of the castle hill, the rooftops, and towers of the city, as well as the residential area in the hills.

Kilometre Zero: Under the gate there is a Kilometer Zero with the world sides, which shows the distance of European and world capitals from Bratislava. 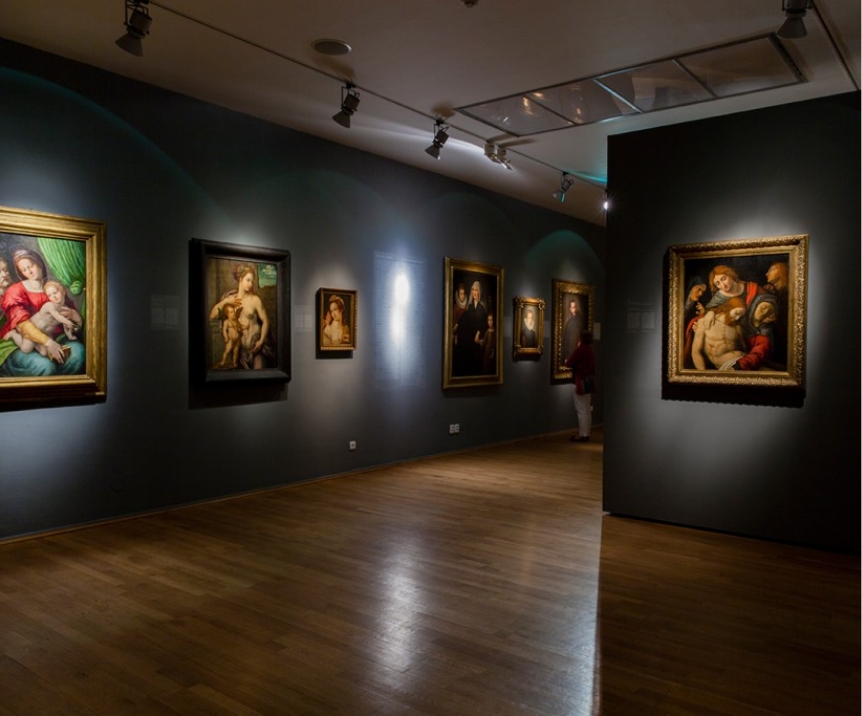 is the most significant Slovak state art-historical, scientific and research and cultural-educational institution, based in Bratislava, specifically in the Esterházy Palace. It organizes exhibitions, animation programs, educational programs and much more. Be sure not to miss the Ex Libris bookstore, full of great books and art catalogues. 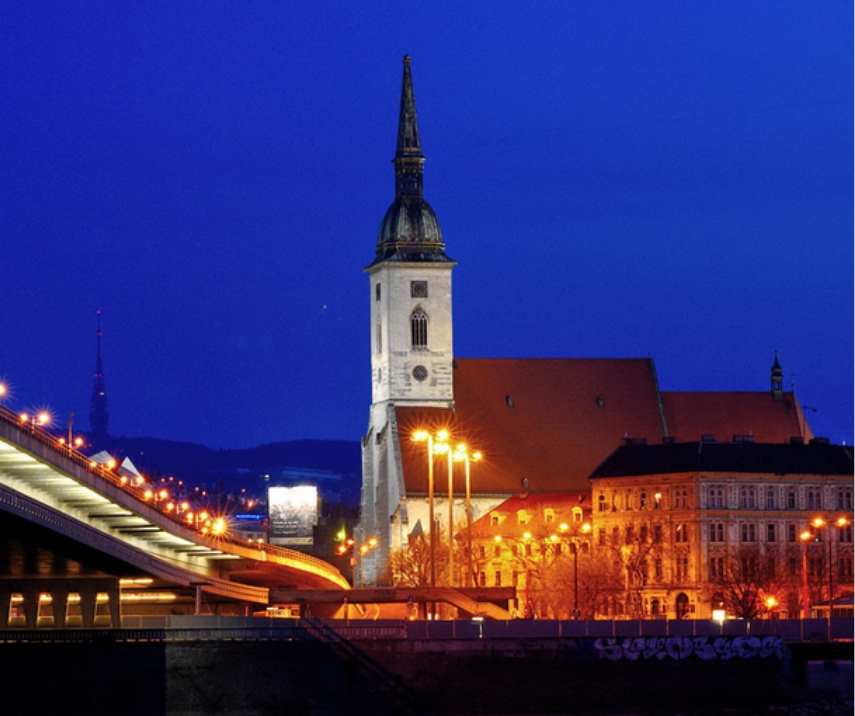 St. Martin’s Cathedral, which once served as the coronation church, is also worth mentioning. A reminder of these times is a gilded replica of the coronation crown mounted on the top of the cathedral tower at a height of 85 meters and weighing 150 kg. Today, the cathedral is a Gothic church from the 15th century. 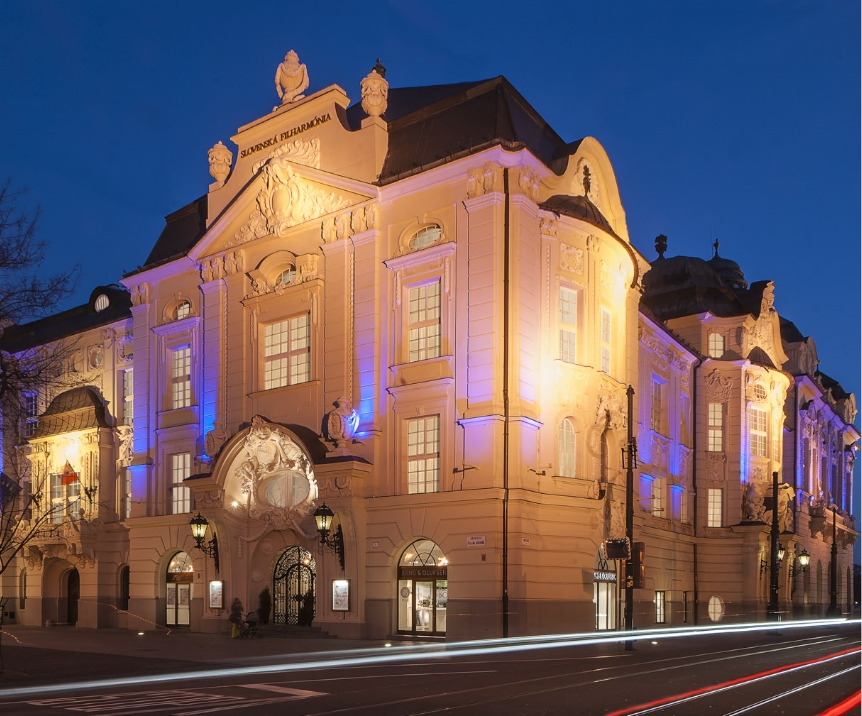 The Reduta building, today the seat of the Slovak Philharmonic, is currently one of the most important historical, cultural, and social buildings in the old town. The building is truly charming and the concerts in it are an unforgettable experience. 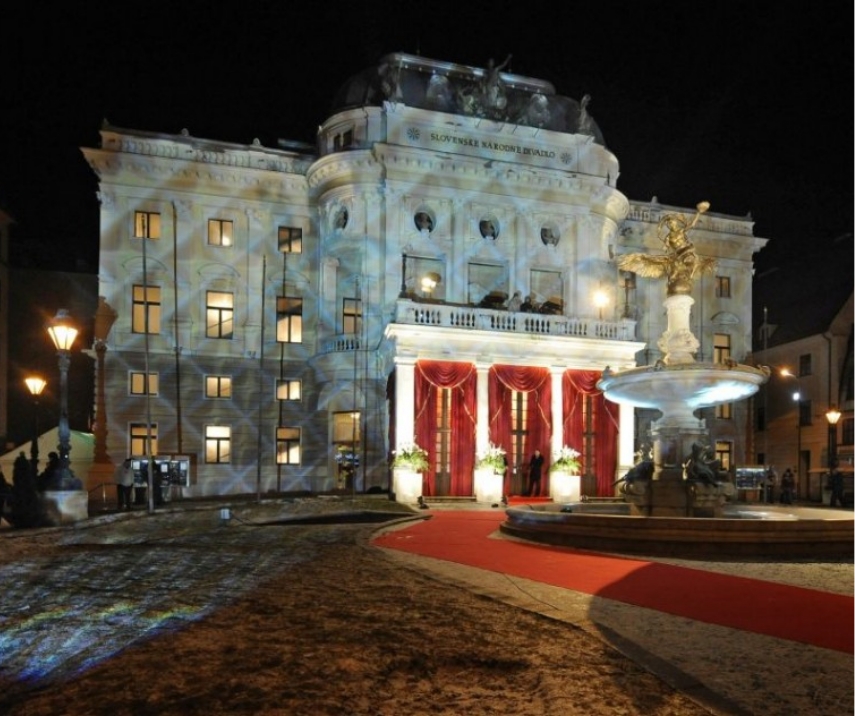 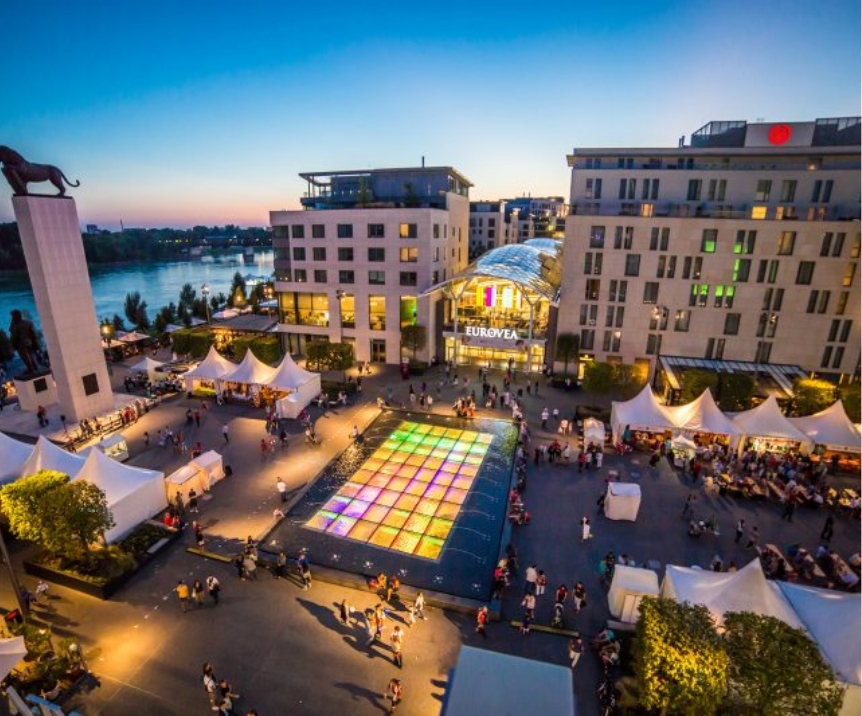 If you like shopping, do not hesitate to visit the Aupark or Eurovea shopping centres. In good weather, you can take a pleasant walk along the promenade on the Eurovea waterfront. 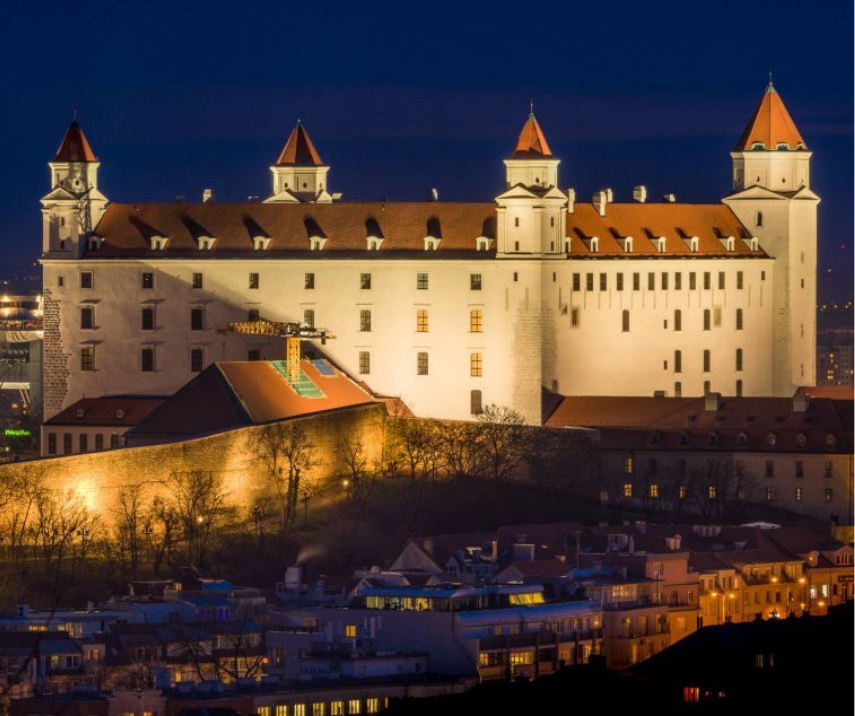 What you clearly can’t miss in Bratislava is Bratislava Castle, which was the original seat of the monarchs. This symbol of Bratislava has a crown tower up to 47 meters high. The royal coronation jewels were once kept in it. Today you can enjoy a wonderful view not only of the city but also of the neighbouring countries from the tower. 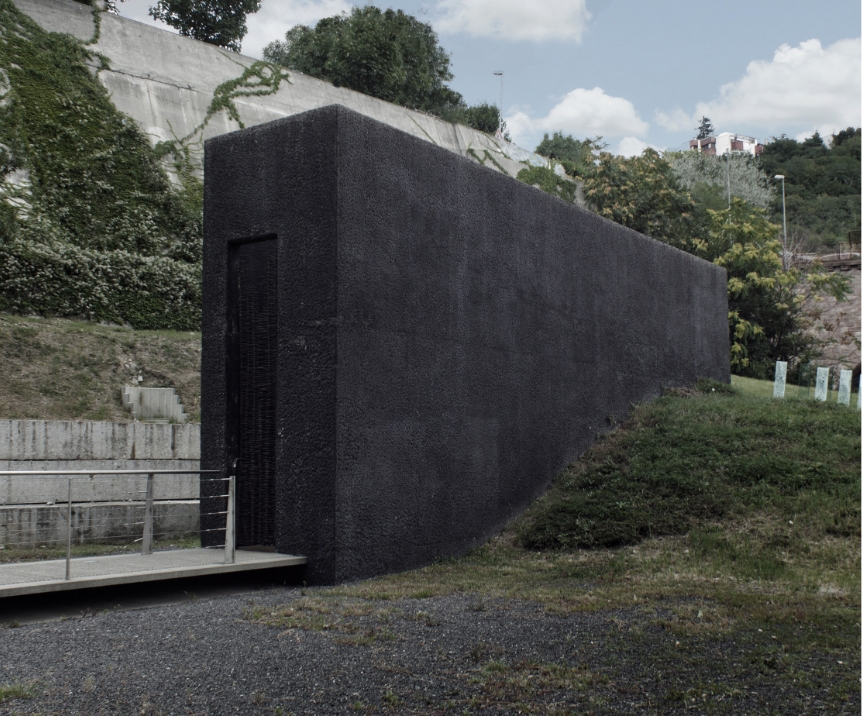 A unique place is also a monument to the important Bratislava rabbi Chatam Sofer, which reflects the history of the Bratislava Jewish community. In the years 2000-2002, this compound was restored by the architect Martin Kvasnic, who managed to meet the strict requirements of halacha as well as the highest standards of contemporary architecture. 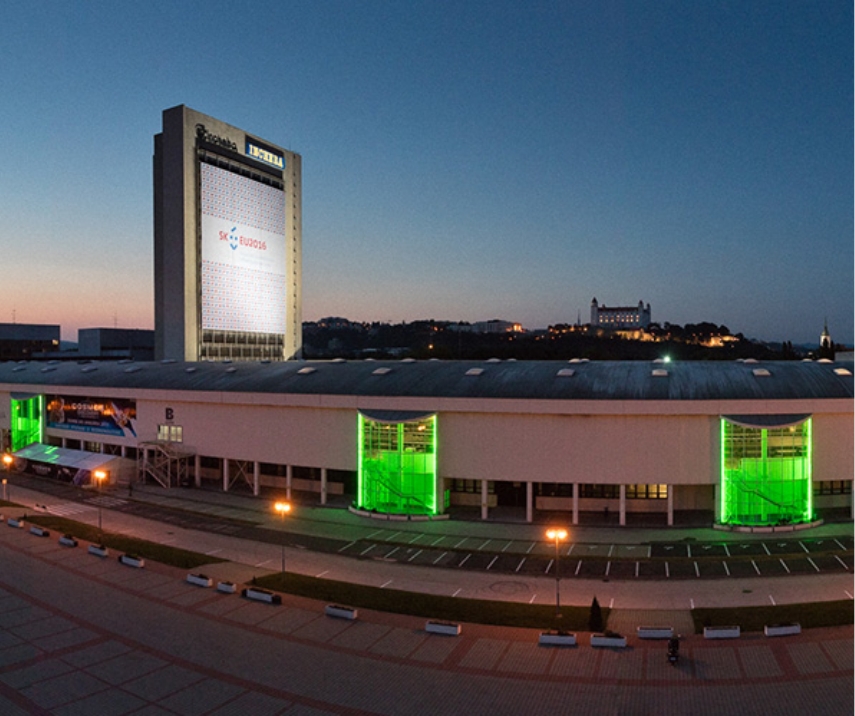 Incheba Expo is the largest exhibition complex in Bratislava. Interesting cultural, sports or social events take place here every year. Who knows, maybe events held during your visit to Bratislava will be exactly to your taste. 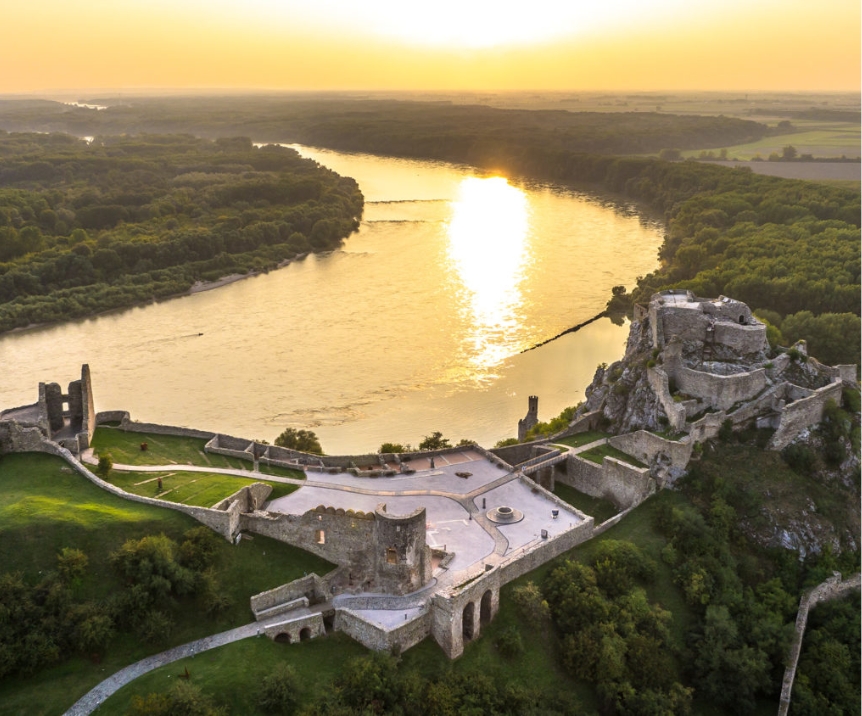 The most important historical and archaeological localities in Central Europe include the castle ruin on a high cliff above the confluence of the Danube and Morava rivers. The location of Devín Castle is a very pleasant place with enchanting natural scenery. Entrance fee during the months of April-October is 5 € and during the months of November-March 2 € 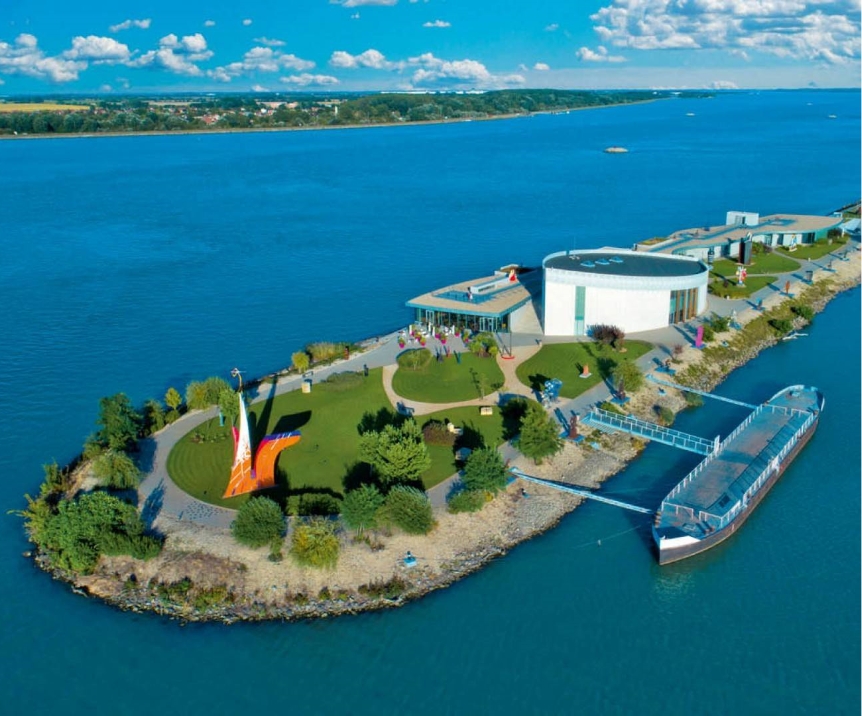 One of the most romantic museums of modern art in all of Europe is the Danubian Maulensteen Art Museum. It was founded by Dutch collector and art supporter Gerard Maulensteen in collaboration with Slovak gallerist Vincent Polakovič. After the completion of the museum in 2014, it has become a symbol of modern Bratislava, which is recommended by the world’s most prestigious travel guidebooks and social websites. This modern museum is worth your attention. 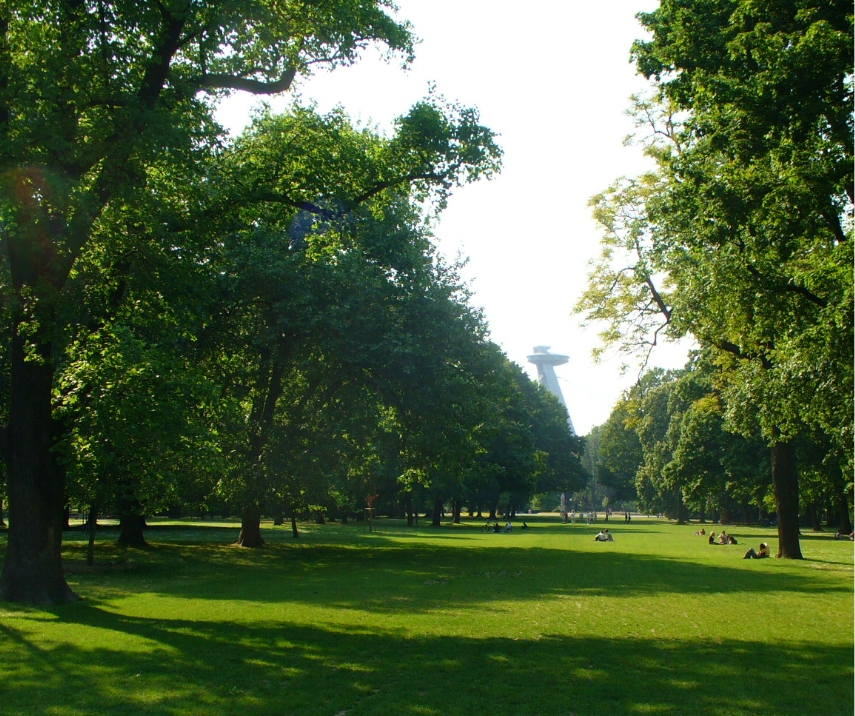 Bratislava can take pride in the oldest public park in Central Europe – Janko Kráľ Park. It is a popular place for people who like sport activities as well as for families with children. In addition to active rest, various cultural events are often held near the park, on the riverbanks of the Danube. 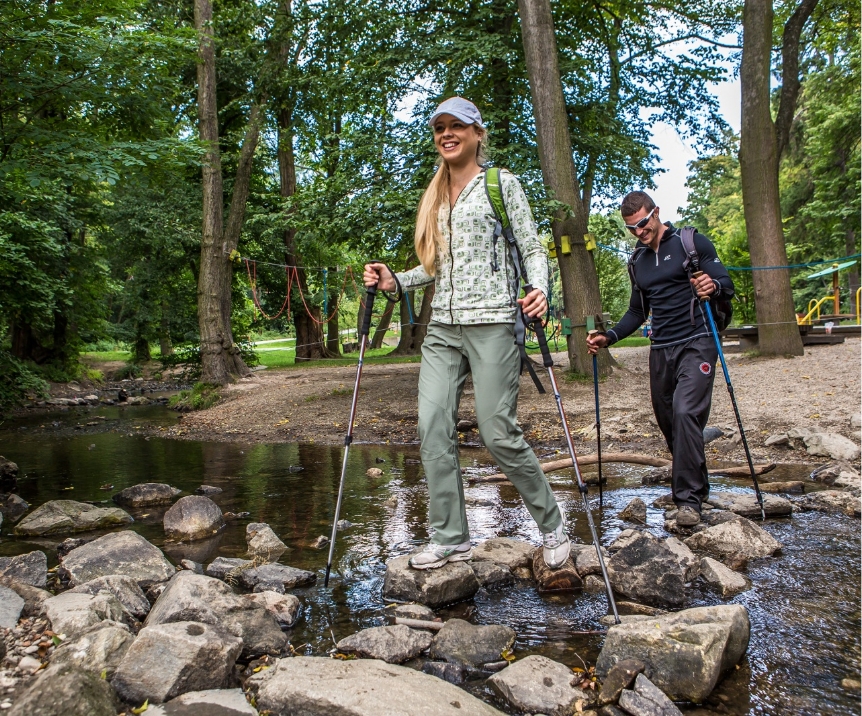 Železná studnička is a place where you can spend a pleasant time with children or have a barbecue with friends. It is one of the most popular holiday resorts. You can also find here a chairlift that offers beautiful views. 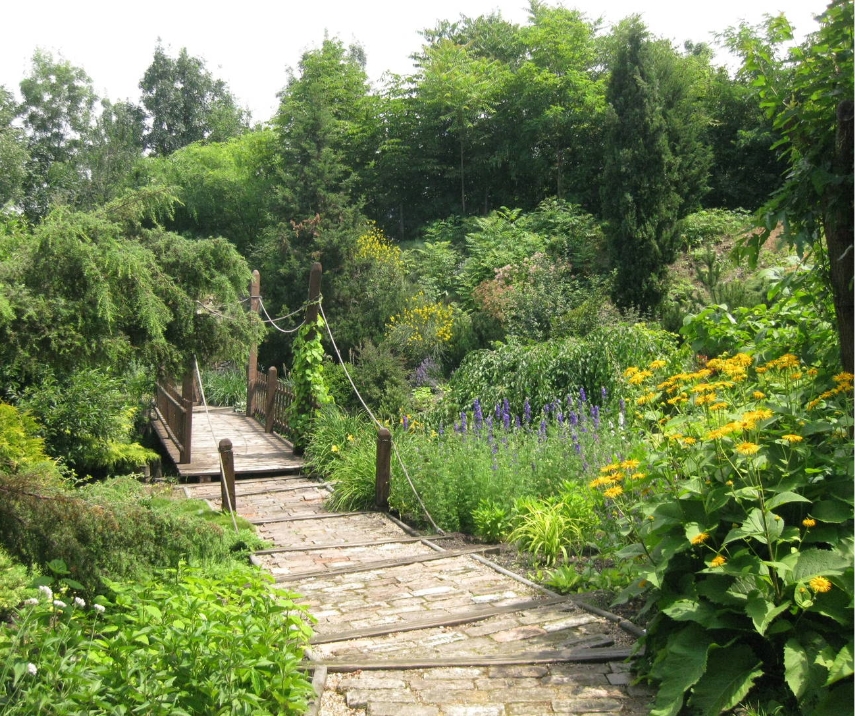 You will find a perfect oasis of peace and natural beauty, which contrasts with the surrounding hustle-and-bustle of the big city in borough of Bratislava – Karlova Ves. Your body and soul will relax in the beautiful Botanical Garden, part of the Bratislava’s Comenius University. 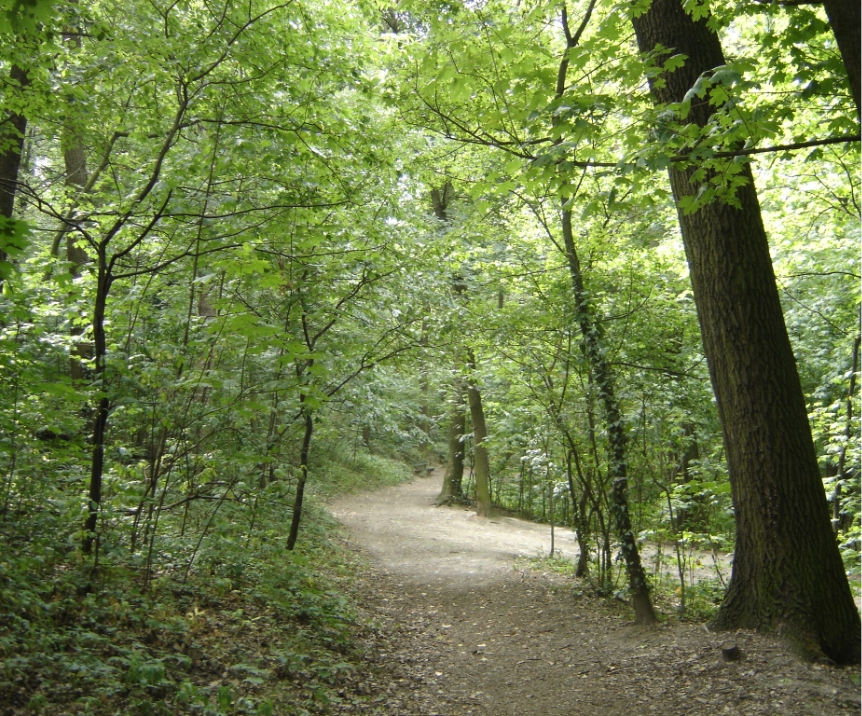 Forest city park and its popular leisure areas are quickly and easily accessible from the city centre. Its peculiarity is that the original fauna and flora have been preserved here. In the Forest city park, active athletes as well as lovers of peaceful walks will enjoy themselves. 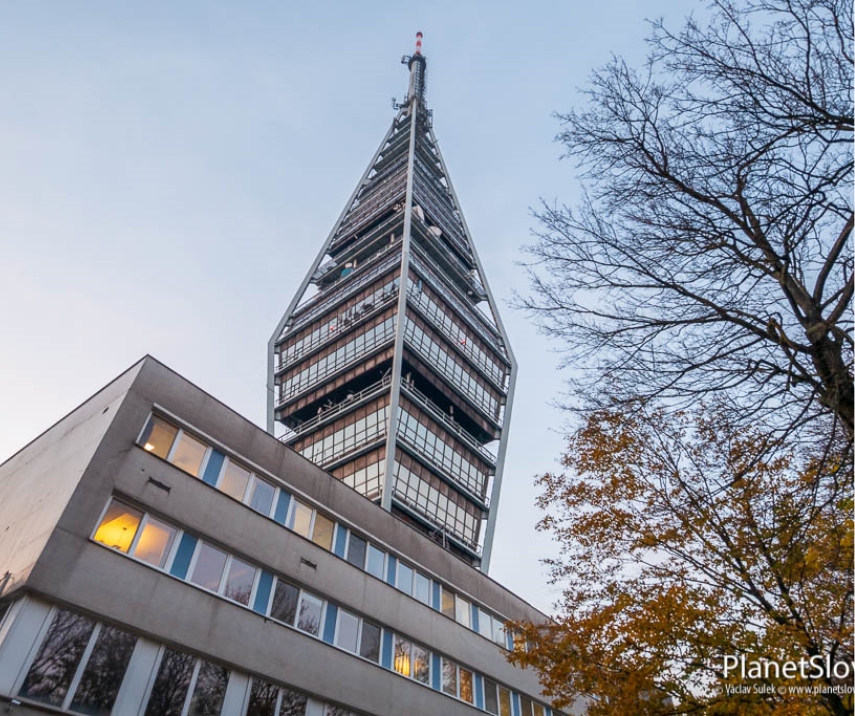 An extensive hill (439 m above sea level) in the southern part of the Little Carpathians and a frequently visited excursion place in the Bratislava Forest Park. Its main tourist attraction is the 200 m high television tower built in 1974. The revolving part of the tower, where the restaurant is located, offers visitors a panoramic view of the surrounding area. From the top of the television tower, you can see Lake Neusiedl located in Austria or foothills of the Alps. Kamzík is easily accessible by the asphalt road leading from the borough of Bratislava – Koliba, which can be reached by bus line No. 203. Get off at the Koliba stop and continue either along the asphalt road or along the green tourist sign, which starts at the Main Railway Station. 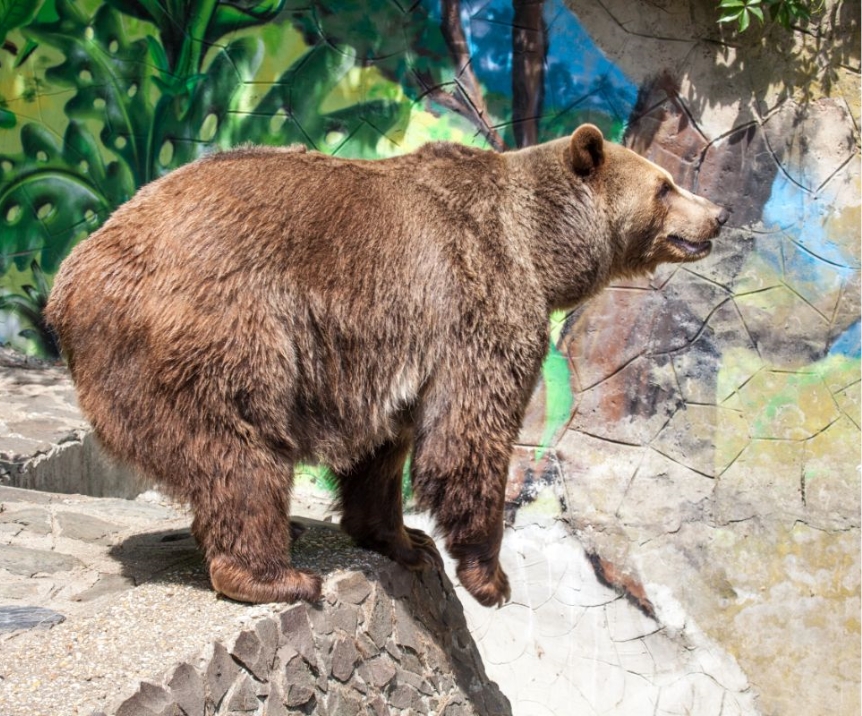 The Bratislava City Zoo in the borough Mlynská dolina is undoubtedly one of the most visited places in Bratislava. You will find here more than a thousand animals from almost 180 species. 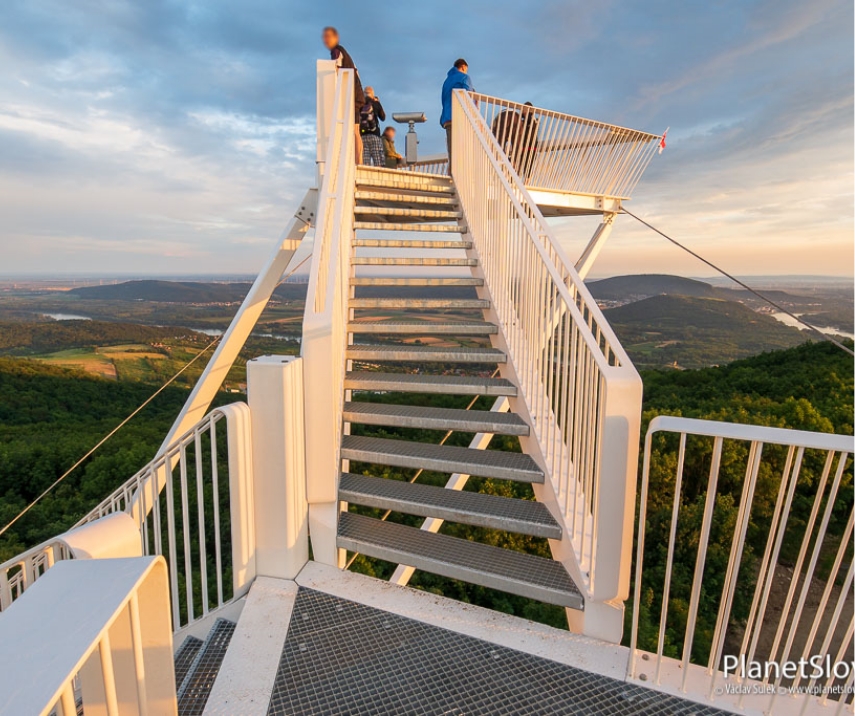 The lookout tower on Devínská Kobyla is easily and quickly accessible. There are several options for how you can get there. It depends on how difficult hikes you like. The mentioned hill is interwoven with a network of hiking trails, each of which offers something nice. You can get here from the borough of Dúbravka, Karlova Ves, Devín and Devínská Nová Ves. It is up to you which variant you choose. The fastest trail is from the borough of Dúbravka – Dúbravská hlavice, where you can also take a pram. 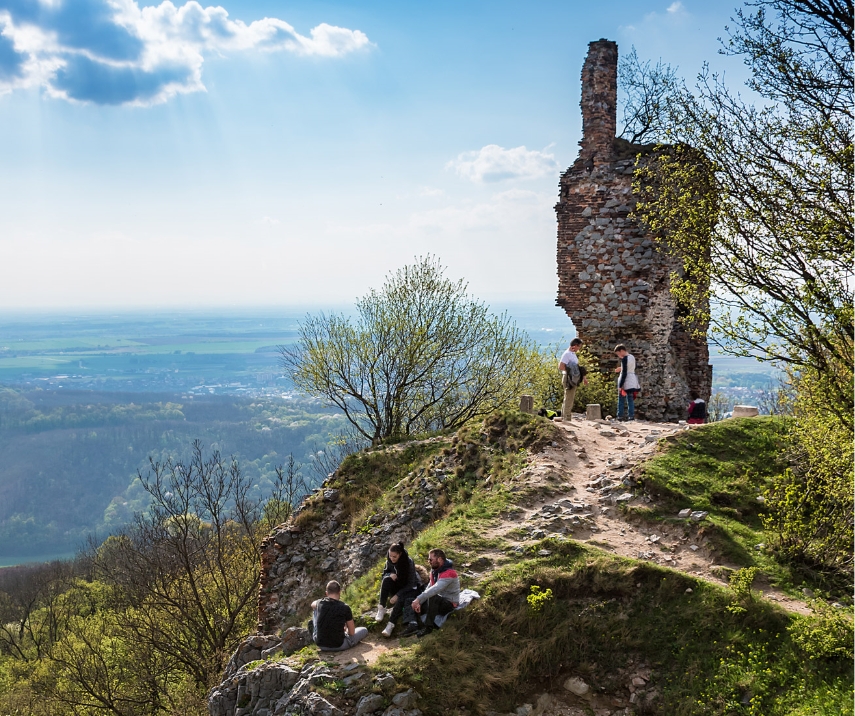 The circumstances connected to the origin of the castle are not completely known. Some historians prefer the theory that the Pajstun castle is in fact the Stupava castle, conquered by the troops of the king Ottokar II of Bohemia in the year 1271.From the castle ruins is a beautiful view of the Little Carpathians and the southern part of the Záhorská lowland. In good weather you can even see the Austrian Alps. You can get here directly from Bratislava, from the bus stop under Nový most (or also from Patrónka) by bus No. 37 to the final stop in the borough Záhorská Bystrica. From there it is possible to continue along the blue sign to the village Marianka and along the red line through the village Borinka to Pajštún. The walk takes about 1.5 hours. 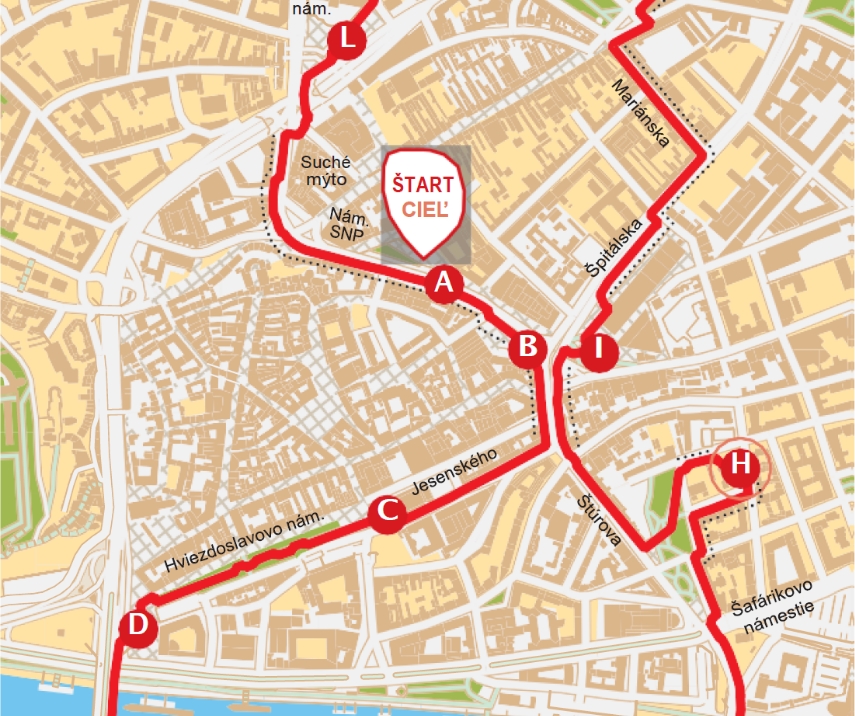 Circuit of the old town

This route will show you what Bratislava is like and its identity.

How communist totalitarianism swept away what stood in its way to brighter tomorrows.

How the Danube does not stop flowing under the still beautiful historic city. 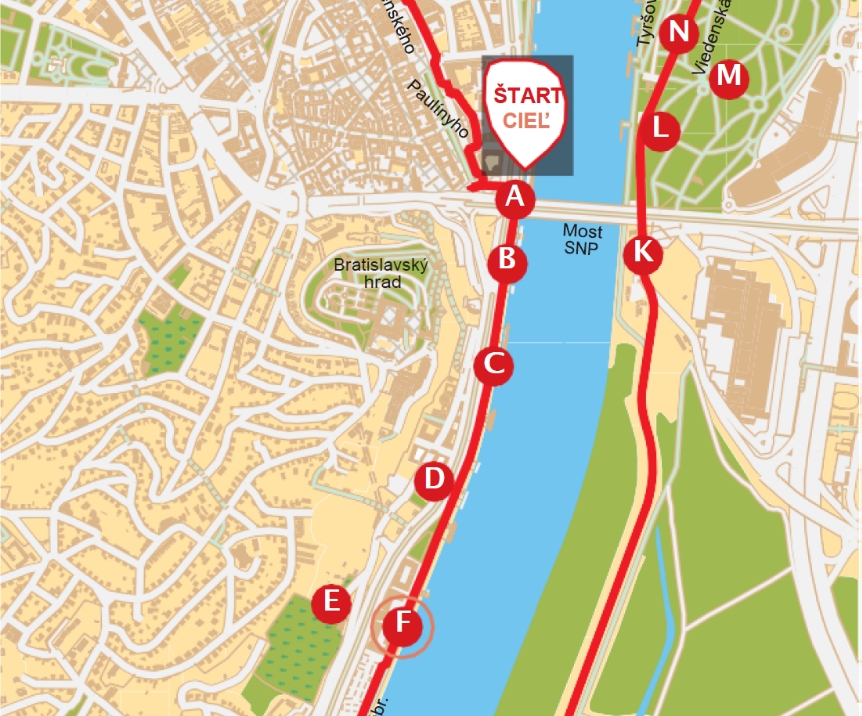 On this route you will discover an unsettled history of waterfront neighbourhoods, their transformations, bridges, beaches, parks, and iconic views.

An easy ride without inclines and traffic around the beautiful blue Danube awaits you! 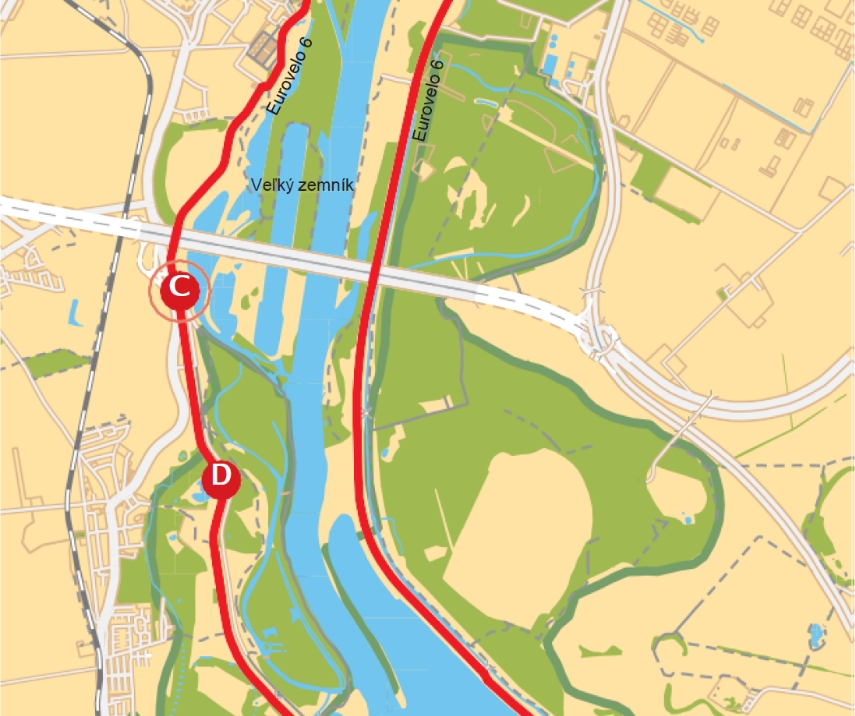 ALONG THE BANK TO DANUBIANA ART MUSEUM

Along the beautiful blue Danube through flood plain forests to the peninsula of art.

Connect to the Bratislava cycle highway and discover the natural nooks and crannies along it.

The Danube Dam will take you from the centre along forests, meadows and the banks to the inspiring Museum of Modern Art Danubiana washed by the waters of the great river. You can use the ferryboat which will take you to the other side of the bank from where you can go back to the city. 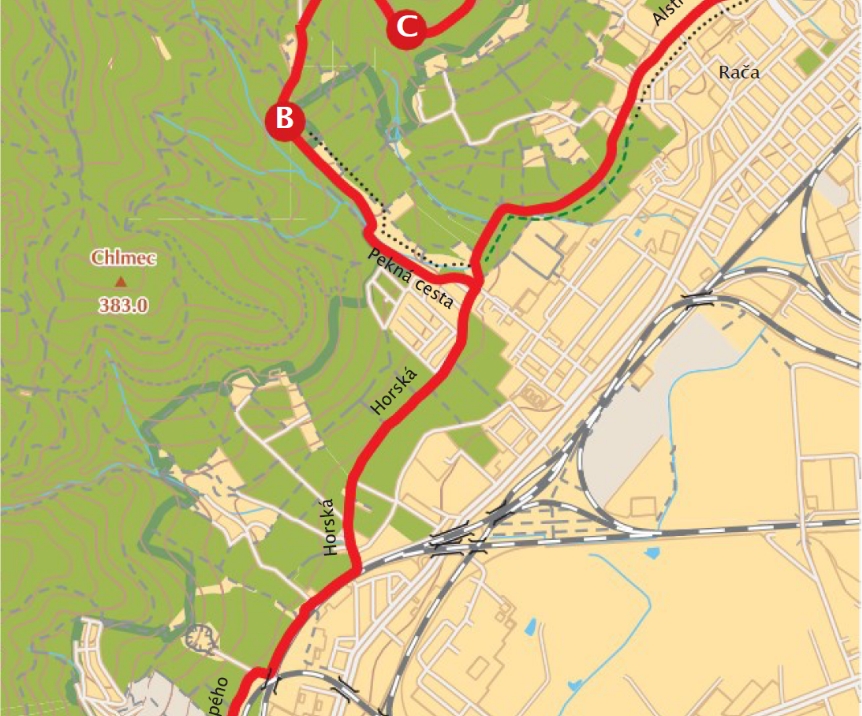 TO FORESTS AND VINEYARDS

In Bratislava, wine is always within reach. Also, a view from the middle of the city on the wooded hills reveals the vineyard fields. Villages and towns on the south-eastern slopes of the Little Carpathians are connected with the history of wine production for centuries.

Within Bratislava, viniculture is still alive, especially in the borough of Bratislava – Rača.

Head here for a wine tasting from the city centre through beautiful vineyards and Carpathian forests with nice views of the city. 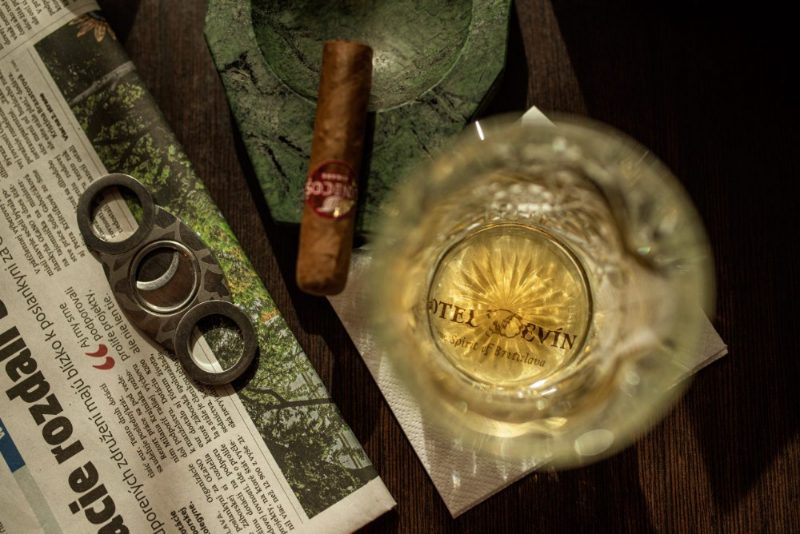 Read the news and highlights in our Journal. You will learn more about Hotel Devín****, updates or seasonal offers. We will also bring you interesting information from the centre of the capital of Slovakia.